The Religious Discrimination Bill 2019 is really a belated political pushback against the LGBT rights activists who appear to control the country's taxpayer-funded anti-discrimination boards and human rights commissions.

This is because persecution of bible-believing Christian social-media commentators, and even ordinary people who disagree strongly with LGBT attacks on traditional marriage - has become a growth industry in Australia over the past 15 years.

This attempt to silence some Australians from expressing their religious beliefs in relation to homosexual behaviour has cost taxpayer's tens of millions of dollars. Tribunal decisions must be made on hundreds of trivial homosexual-vilification complaints, dug up from cyberspace by LGBT activists.

An LGBT-rights de-facto police force, backed up with real legislative power, was enabled in 2005 by means of the pioneering homosexual-vilification test-case, referred to as Collier v Sunol [2005] NSWADT 261.

This test-case opened the floodgates for the NSW Anti Discrimination Board to employ an LGBT activist to trawl through internet discussion forums and blog sites, and furnish them with hundreds of homosexual-vilification complaints.

This 2005 case-law re-defined the meaning of "public act" in section 49ZT of the NSW Anti Discrimination Act, so that, for the first time, it applied to random social media posts that could be claimed to offend LGBT persons or groups.

At the time it was touch-and-go whether the Anti Discrimination Board could achieve this unprecedented and radical case-law.

What they did was to use an LGBT activist by the name of Henry Collier - a leader of the Sydney Mardis Gras gay-pride committee and an accounting lecturer at Wollongong University - to target a very vulnerable Pentecostalist evangelical Christian man, by the name of John Christopher Sunol.

This man was an ideal respondent, or, in Lenin's words "a useful idiot". He was the ideal candidate to be used to fabricate case-law. That was because he had the remnants of acquired brain injury.

In court he became befuddled due to memory problems. It was a no-contest between him and the highly skilled LGBT barristers & solicitors working for the other side, pro bono.

The applicant Mr Collier was joined by an outfit of malevolent trolls call ZGEEK who provoked Mr Sunol and then published his angry replies on his own blog. Thus they manipulated Mr Sunol for the purpose of entrapment. Two of the ZGEEK trolls were used by Mr Collier as witnesses.

Another 2 of the ZGEEK members who were involved with that first Collier v Sunol case in 2005, Mr Tim Kerslake and Mr Rod Swift, 21 years later in 2020 started further vexatious litigation against Mr Sunol in the Australian Capital Territory Civil & Administrative Tribunal. This case is named Kerslake v Sunol.

The upshot of this story is that the millions of dollars of taxpayer's money spent on repetitive and vexatious social-media homosexual vilification complaints since 2005 has grown from a very fragile foundation.

That foundation, if it is exposed for what it was - a "set up" - then it will render problematic all subsequent tribunal decisions that rest on the tribunal's citing the case Collier v Sunol in their decisions.

The partisan political ramifications arising from this issue are discussed in an opinion piece by Paul Kelly, published in the WEEKEND AUSTRALIAN, November 27-28, 2021, as follows:-

MORRISON APPEALS TO A HIGHER ORDER

"Scott Morrison has tied his authority, standing and convictions as Prime Minister to the religious discrimination bill - a measure that, while belated, is fundamental to Morrison's personal vision of a nation that protects faith-based and multicultural communities".

"By personally introducing the bill, Morrison has elevated the stakes. He needs this measure passed into law before the 2022 election to honour his 2019 pledge - and if this bill fails, then Morrison will hang this defeat around Labor's neck in every religious-based marginal seat in the country."

See further comments added to this post on RELIGIOUS FREEDOM. 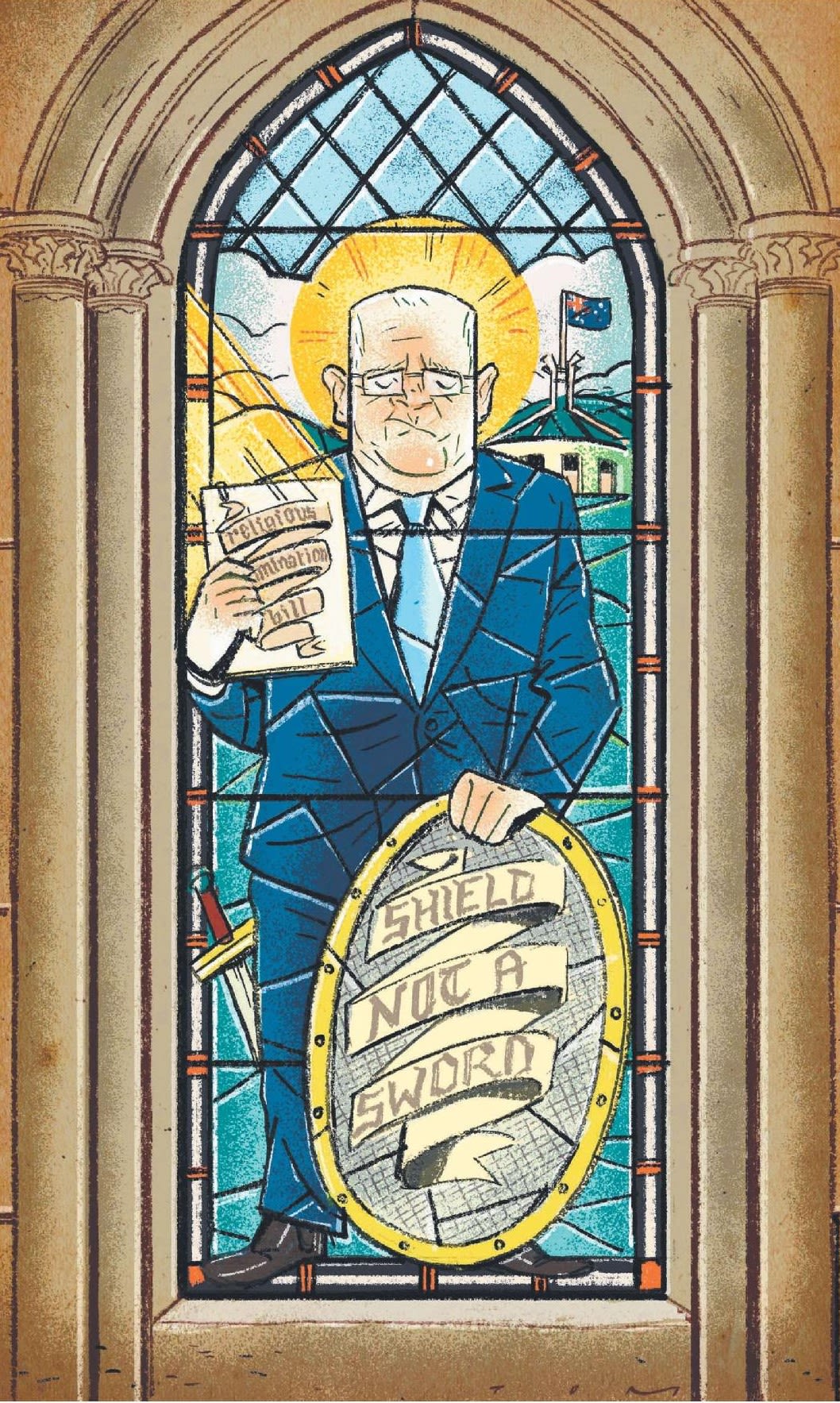 The Prime Minister said he would amend the act, as his government seeks to introduce its contentious Religious Discrimination Bill, designed to shield religious groups from discrimination claims. Mr Morrison said he did not support Brisbane's Citipointe Christian College for asking parents to sign an enrolment contract acknowledging children could be expelled based on their sexual orientation or gender identity.

"My kids go to a Christian school here in Sydney, and I wouldn't want my school doing that either," he told Brisbane Radio Bio5. "The bill that we're going to be taking through the parliament, we will have an amendment which will deal with that to ensure kids cannot be discriminated against on that basis." Mr Morrison flagged a change to the commonwealth's Sex Discrimination Act, which makes it lawful for "religious bodies" to discriminate against people in certain circumstances on the basis of sex, sexual orientation or gender identity. "The law, as it sits, would allow for that. But that's what I'm trying to change ... religious freedom isn't just about people who have religion, it's also about people who don't. You shouldn't be discriminated against by what your religious faith is or isn't."

He defended schools' rights to teach religious doctrine: "You should be able to send your kids to a Christian school or Muslim school or a Jewish school, or whatever it is, they should be able to teach, you know, kids in that way." The parliamentary joint committee on human rights, which has been scrutinising the Religious Discrimination Bill, will report its findings on Friday.

Citipointe Christian College apologised on Thursday after likening homosexuality to pedophilia and withdrew its contract forcing students to abide by their "biological sex". College principal Brian Mulheran told parents they would no longer be asked to sign the contract as a condition of enrolment.

"We deeply regret some students feel they would be discriminated against because of their sexuality or gender identity, and I apologise to them and their families on behalf of the college," he wrote. The college created a furore when it threatened to expel "sinful" gay, lesbian or transgender students.

Queensland Education Minister Grace Grace said she would refer the matter to the Non-State Schools Accreditation Board, declaring the school's values "don't seem very Christian to me".

Ms Grace, who has revealed that her child is non-binary, said the school's contract

had been "distressing" to read. "I urge, in the interest of the mental welfare of students, staff, parents and carers and in the public interest, that they abandon these contracts and they never resurface again," she said on Thursday.

The withdrawn contract had made it a condition of enrolment that students behave "on the basis of the individual's biological sex".

"Better protections must apply to both teachers and students", legal director Ghassan Kassisieh said on Thursday, "but the Morrison government's Religious Discrimination Bill will invite exactly this type of practice in employment across faith-based organisations, from schools, aged-care services, emergency accommodation and hospitals. The Prime Minister may be putting out one small fire but his ... bill will unleash a firestorm of discrimination in religious organisations against anyone that holds a different belief from their faith-based employer." ADDITIONAL REPORTING: LYDIA LYNCH

FRONT PAGE STORY IN TODAY’S AUSTRALIAN NEWSPAPER (November 17, 2021) . . . is really about the right of an Australian citizen - who identifies as Christian - to publicly express his or her religious conviction that homosexual acts are a sin. At the present time, any public disapproval of homosexual …