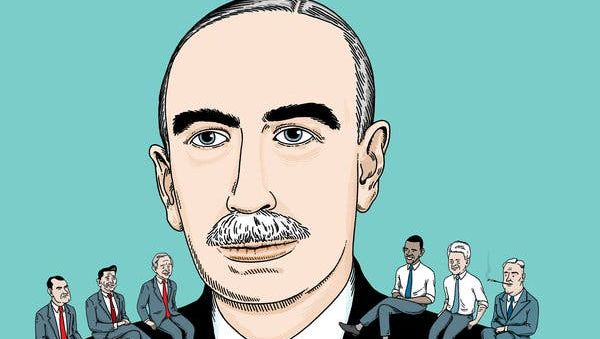 Alan Kohler is the editor in chief of Eureka Report

(Embedded pictures are from Google Images)

Huge changes in economics and politics are coming

As 2020 drags on, and so does the coronavirus, it’s becoming clearer that this will be a watershed year for the world in a few big ways.

There are some relatively minor ways as well, although they’re far from minor for those affected, such as the acceleration of online shopping and digital generally, and the death of tourism as we had come to know it.

But the two big ones that will make us forever to refer to “Before 2020” and “After 2020” are first, a revolution in the role of government, and specifically how spending and deficits are funded and thought about, and second, the Western world’s relationship with China.

This is now the second time in not much more than a decade that governments have had to rescue the private sector, but while in the GFC it was from a sickness within capitalism itself, this time it’s from an external pathogen.

After the GFC, policy was still focused on balancing budgets and repaying government debts through fiscal austerity that was either disastrously implemented (Europe) or just talked about (Australia), but that can’t happen this time.

The sums are simply too large and any return to surplus budgets too far off to be credible or worth promising. Instead we are seeing the ideas of Modern Monetary Theory (MMT) begin to filter into the mainstream, and while the notion that deficits and government debt don’t matter is being furiously resisted by traditional economists and conservative politicians, variations of what might be called MMT-lite are already happening.

Since 2009, global central bank assets have increased from $US5 trillion to $US25 trillion ($35 trillion) through the creation of money to buy (mainly) government bonds. The Bank of England agreed in April to a big increase in the British government’s overdraft, in effect directly monetising government spending. In Australia the Reserve Bank has been engaging in yield curve control, which involves buying government bonds to cap long-term interest rates.

As time goes on, and 2020 turns into 2021, the long-held idea that governments are like households and businesses that have to repay their debts, or even that government deficits must be financed by debt at all, will increasingly be exposed as a mistake.

It will be more or less a return to Keynes, except with the twist that the Keynesian aim of balancing the budget over the course of the cycle — deficits in bad times, surpluses in good times — doesn’t matter, not that anybody has actually achieved that lately anyway.

In future 2020 will be seen as the year when Keynes 2.0 got under way — when monetary and fiscal policy merged and a more sophisticated theory of government took hold, in which spending has no limit apart from the capacity of the economy.

As debt continues to be monetised, it will become obvious that without economic bottlenecks, spending and deficits can increase with no negative inflationary and welfare impacts.

It will also be seen as the year in which the world split into two again, and Cold War 2.0 began.

Trump’s US and Xi’s China were already lurching towards that, but the pandemic has confirmed and accelerated it.

A story that received little attention at the time, especially in Australia because of the bushfires, was that in December last year, China sent a fleet of 63 commercial fishing boats with four coast guard vessels as escort into Indonesia’s exclusive economic zone in part of the South China Sea.

The threat to Indonesia’s fish stocks was obvious, and since fish represent 50 per cent of the country’s protein intake and fishing employs 12 million people, President Joko Widodo dispatched his own fleet of coast guard vessels, and four F-16 fighter jets.

Last week, US Secretary of State Mike Pompeo declared China’s claims to the South China Sea to be unlawful, in a tough 750-word statement that concluded: “The world will not allow Beijing to treat the South China Sea as its maritime empire. America stands with our Southeast Asian allies and partners in protecting their sovereign rights to offshore resources, consistent with their rights and obligations under international law.”

Fish are the key offshore resource for all of the countries surrounding the South China Sea, which accounts for 15 per cent of the world’s fish.

Also last week, Britain banned Huawei from supplying any of its 5G network, joining a growing list of western countries, including Australia, deeply suspicious of the Chinese telco.

Then there’s the virus itself, which started in China and from which China is emerging faster and more strongly than most countries, especially the US. A WHO inquiry into it has been agreed, but it’s not at all clear that it will be the sort of investigation that Australia has called for.

And then there’s all the cyber hacking, the international alarm over Hong Kong, and the skirmishes on the India/China border, all leading to a push to turn the G7 into “D10”, for “Democratic 10”, excluding China but including Australia, India and South Korea.

And now there’s something called the Inter-Parliamentary Alliance on China, an international cross-party group of legislators working towards toughening how democratic countries approach China. The Liberal MP for Canning in Western Australia, Andrew Hastie, is an enthusiastic member of it.

On the other side, Huawei is rolling out 5G infrastructure across much of Africa and China is building surveillance systems for a dozen African countries. Earlier this month, 53 allies took China’s side in the UN Human Rights Council over Hong Kong’s new national security law — and most of them were members of the Belt and Road infrastructure initiative.

The momentum towards a bipolar world seems unstoppable, and as the pandemic rages in the US, the world is choosing sides.

Australia has made it clear which side we’re on, even though that’s likely to end up being very costly. In time, businesses and investors will have to choose as well.

For general interest: background on Keynes